I had my first theological revelation five minutes after being commissioned as a pastor.

It was no surprise.

The communion service was the first thing that followed the commissioning and it has become a tradition for the new pastor to serve communion.  My co-pastor, Armel, and I had carefully practiced who would take which parts of the service.  For purely selfish reasons I had claimed the role of breaking the bread based on all those years that women did the labor of setting up communion without the right to officiate in the role of presiding at the table.  “We could bake the bread but we couldn’t break the bread,” had become my mantra. So I had no hesitancy or embarrassment in claiming the role for myself and to Armel’s credit he was generous and let me have my pick of how I wanted to do things.

I wanted to be the one to break the bread.

Armel and I were commissioned on October 3rd; World Communion Sunday.  I knew there was a yuppie bakery in town in the district they are revitalizing:  Paris Bakery.  Who could resist a place called the Paris Bakery?  True to its name they had great looking bread.  I ordered two of every loaf they made and my only regret in the entire transaction is that I never took a photo of the final work of art.  I had a huge basket laid out on a Guatemalan blanket with its richly colored stripes.  Inside the basket lay sturdy round loaves of rustic brown rye, light brown wheat, oblong tubes of sourdough, croissants, tortillas, long bagettes sticking out majestically and sparkly sugar cookies sprinkled in crevices with “Paris Bakery” stamped in them.  It was a festival of bread.

When it came time to break the bread I had the privilege of sifting through the basket before finally choosing an especially beautiful loaf : a beautiful dark brown round loaf.  Then I held it aloft to show the congregation. 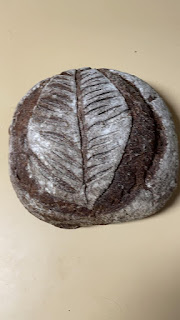 And then I got my theology lesson..

I had heard that sometimes the bread could be hard to tear apart.  Especially when dealing with a freshly baked and soft and dense loaf of bread.  I’ve seen pastors twist and pull, grunt and groan, trying to get the bread to yield to their will.  There are tricks pastors use to get around this problem.  They will score the loaf ahead of time or have someone do this for them; a little shortcut.  Sometimes the preparation team will get especially zealous in their scoring and the bread will almost fall apart at the slightest touch.

The goal it would seem is to have a loaf that tears in half neatly like a sheet of paper.  Efficiently.  Tidy.  Effortlessly.

Fortunately for me, I had a mentor explain years ago what is wrong with that theology.

And it was good because I had the misfortune of having one of those loaves of bread at my first communion.  Fresh.  Soft.  Dense.  Excellent bread from a quality baker.  Great to eat.  Not so easy to break for communion.  And, being a rookie, in all my hustling and bustling around, I had forgotten to score the bread.  I never stood a chance.  I started tearing.  The bread wouldn’t budge.  I dug my fingers in and made a hole to get a better grip; I pulled harder.  It still wouldn’t budge.  I twisted it and it began to give a little.

I didn’t exactly work up a sweat or get out of breath but I came close.  I didn’t exactly bend down and step on one end of the loaf, anchoring it to the ground while pulling upwards with my hands; using my whole body but it felt like that might be required before the process was done.

Gradually it tore a little but, by this time, it was hardly a tear down the middle. More ripping and grunting, more mangling and I ended up with two pieces, not exactly halves.

"This is my body, broken for you."

If breaking apart a loaf of bread to represent Christ’s body on the cross was hard, I realized the crucifixion wasn’t any walk in the park for Jesus, either.  And the more difficult it is for the pastor to break the bread the more vivid the lesson.

The breaking of Jesus’ body was brutal. He had been stripped of his robe.  He had been whipped naked.  They put thorns on his head. They had run a sword into his side.  With nails driven through his feet and hands he couldn’t properly stand to take a full breath.  His body was mangled. He couldn’t breathe.  He was thirsty.  It was bloody and sweaty work.  His body was bruised and wounded.  There was nothing tidy about it.

This is something God did for us.  God became human and through Jesus understands the pain of torture and death.  God understands that being a human is hard work.

There, in front of a sanctuary full of friends and family, I received a theology lesson while everyone watched.  Breaking bread is hard work. It’s not pretty or elegant.  And it shouldn’t be.  The crucifixion was hard.

I vowed that day that I will never be one of those preachers who will score the bread so communion will go easily and look dignified.  We can be dignified in our vestments and processions and liturgy.  We can be graceful in our movements when we process in or light candles or sprinkle babies.  But breaking Christ’s body was a brutal act and He asked for us to remember.

I will try my best.

Introducing our blog:  Jane Els and Armel Crocker were commissioned as pastors through  Grace Presbytery on October 3, 2021 at First Pr...