Now when Jesus came into the district of Caesarea Philippi, he asked his disciples, “Who do people say that the Son of Man is?”  And they said, “Some say John the Baptist, but others Elijah, and still others Jeremiah or one of the prophets.”  He said to them, “But who do you say that I am?”  Simon Peter answered, “You are the Messiah,[a] the Son of the living God.”  And Jesus answered him, “Blessed are you, Simon son of Jonah! For flesh and blood has not revealed this to you, but my Father in heaven.  And I tell you, you are Peter, and on this rock I will build my church, and the gates of Hades will not prevail against it.  I will give you the keys of the kingdom of heaven, and whatever you bind on earth will be bound in heaven, and whatever you loose on earth will be loosed in heaven.”  Then he sternly ordered the disciples not to tell anyone that he was the Messiah

This is the word of the Lord.  Thanks be to God.

The text of this sermon:

I think one of the most awesome sights I’ve ever seen was stepping inside St Peter’s Basilica in the Vatican.  It’s a huge building: ornate, old, sacred and beautiful beyond description. We had an excellent tour guide who had prepared us for our visit.  One of the most interesting facts I learned was that the expenses to build it were partly to blame for the Protestant Reformation in the 15th century.  It’s so crammed with masterpieces of great Italian Rennaisance art that Michaelango’s Pieta is sitting off in a corner like they forgot about it. The great churches were built to show the majesties of God and this church is the greatest of them all:  the inside ceiling is 400 feet high. That’s four stories—inside.  And it is the dome in the center of the ceiling I want to tell you about because that is what took my breath away when I saw it.  It was just words, really.  But words written in gold letters, six feet high, gold letters.  And it was the scripture we just read.  In Latin:  “Tu es Petras”  That’s what caused me to stop dead in my tracks and it all came together for me.

Written in Latin, in a circle around the dome of St Peter’s Basilica are the words Christ spoke to Peter: “You are Peter and upon this rock I will build my church. 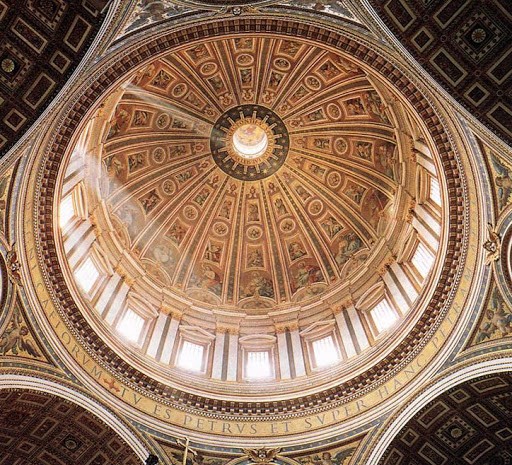 When You are standing 400 feet below it’s hard to make it out because, even though the letters are six feet high, the whole scripture is up there and it’s just a LOT of words and they ARE in Latin, for goodness sakes.  But for some reason, the day I walked into that building, that gorgeous cathedral, I looked up and it was like God had shone a spotlight on just those three words and it was crystal clear to me:  “Tu es Petrus.”  You are Peter.

And here I was, humble little Jane, standing there over 2,000 years later in a building named for Peter to the glory of God for the ministry of Christ.  His church.

People who advocate travel, and I am one of them, will tell you there is no substitute for the experience of actually being there, of being in a place.  And that remains of of the greatest experiences of my life.

Jesus had just asked the disciples “who do you say that I am?” and got all sorts of answers.  Some said Elijah, some said Jeremiah, John the Baptist or a prophet.  But only Simon hit the nail on the head.  “You are the Messiah.”  It was like Simon, son of Noah,  brother of Andrew,  had won the Great Colossal Cosmic Game Show.  You kind of expect to see confetti shoot out and sirens go off and a convertible show up on the stage.

Jesus tells him that this answer didn’t come from Simon himself but that God had provided it for him.  Then he changes everything for the guy.

Jesus completes the relationship. It was two halves of a circle.  Simon had provided the first half and now Jesus would add the second.  Jesus gives him a new name.  This happens throughout the bible.  God changed Abram’s name when he made a covenant with him.  Abram became Abraham.  Jacob became Israel.  And now Simon will become Peter.

And then, to complete the relationship, Jesus told Peter who he would be.  It would complete the circle.  Who am I to you?  Who will you be to me?  If I am your Messiah then you will be the one to spread my word.

“You are the Messiah”. This might not have been that big a stretch for Simon.  Anyone who had been at Jesus’s baptism would have heard God’ voice coming from a cloud declaring that Jesus was the Son of God. And even though the disciples weren’t there at the time, word must have spread. So, Simon had hints and rumors and just plain old “instinct” to rely on to tell him this. But He had seen the miracles and the healings with his own eyes.  He was there afterwards when the crowds murmured, “clearly this man is the Son of God….”

Jesus also knew Peter’s personality.  He knew Peter better than he knew himself.  Jesus picked him out for his ministry based on his strengths and also what some might see as his flaws.  Peter was a poster child for ADHD.  He was loud and brash and impulsive.  He would say the most outlandish things. And he did outlandish things.

But Peter also had an instinctive understanding that the other disciples did not:  that Jesus was the one sent by God, that this guy was the Messiah they had been waiting for.  Peter was tuned into Radio Holy Spirit.

Christ asks us these questions today.  Who do we say that he is? We have all the evidence laid out for us in the bible.  We even have something Peter lacked at the moment Jesus asked him the question:  we know the ending to the story.  We know about the resurrection.  Peter was able to answer without knowing that part.  So we are given a test with the answer sheet tucked into the pages.

We still have to muddle through the question through our own life.  Who do we say that he is?  Is Jesus the Messiah of the world? Is he our personal intercessor? A buddy in the foxholes of life? Somebody to talk to in the checkout lane at the store? At night when the world is dark and scary?

Our own understanding of Christ will change and grow as we mature in the faith because that is the very definition of faith. Faith that claims to know everything ceases to be faith. Who do we say he is?  We can spend our lifetime figuring that one out and fortunately, God has    forever.

I was at a youth retreat once when a teenager told the story of a low point she reached when she was balled up in tears over a huge disappointment.  I think her disappointment was in herself, actually, at the moment.  But whatever it was, she had reached a point where she saw no hope ahead.  And she told her mom, “I don’t think I believe in God anymore.”  And her mother took her in her arms and said, “That’s OK, baby, I will believe in God for you while you can’t.”

Faith is like this.  There is plenty of room for uncertainly to sneak in.  When we go to answer the question, “Who do you say that I am?” the very question indicates some sort of uncertainly.  God knows that we may need some time to answer that question.  It may be that only an impulsive guy like Peter has the answer ready immediately.

And here is the cool thing about Jesus:  Even when we don’t have a clear understanding of who he is or what exactly to do with him, he knows who we are.  Tu es Petras.  You are Peter.

Jesus knew who Peter was. He was a man full of frailties and faults.  But he also knew who Peter was capable of becoming.  Upon this rock I will build my church.  And there is a magnificent building in Rome as a statement of that fact today.

Do we know who Jesus is?  He knows who we are.

Peter would go on to deny Christ but he would also preach great sermons, travel far and suffer imprisonment. And there is a great cathedral built literally on top of what some believe are Peter’s bones.

My life may pale in comparison but I know that God can take my small talents and my large frailties and weave them into something wonderful for God’s Kingdom.

Peter won the quiz show called “Who Do You Say I Am?”  He knew the correct answer when others dithered.

Jesus is the Messiah.  Jesus is the Son of God.  Step out in faith and claim him.  God will do the rest.

Regrettably, Armel's sermon didn't post.  The camera cut off right at the end.  I think there may be a limit.

May I take a moment here to mention that Austin Presbyterian Theological Seminary does NOT teach a class in electronic technology?  All of what you are seeing is self-taught brought to you by two people who barely took typing in high school (and I seriously doubt Armel took typing in high school because it was assumed that boys would all have secretaries to do that for them)?

So, this week, we failed to capture Armel's excellent sermon on video.  But he delivered it in person to the folks in Paris, Texas and I will post the text of it here.  wiat.  I will post it later when we gets back.  I don't have a copy of it right now.

Introducing our blog: Armel Crocker and Jane Els are both members and Ruling Elders at the First Presbyterian Church in Winnsboro, Te... 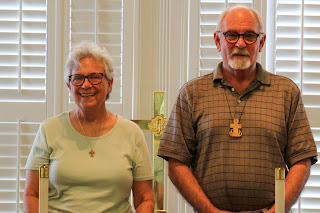 Jane Els and Armel Crocker
Armel and Jane are members of the same church in Winnsboro, Texas and went through Austin Presbyterian Seminary together to get Certificates in Ministry. We are both ordained elders and hope to become commissioned pastors in Grace Presbytery.